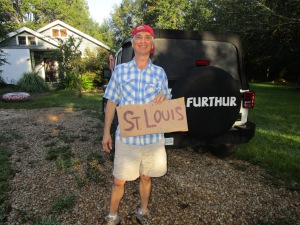 “It’s harder to hitchhike these days.”

I started hearing these comments in the 1980s, but I never found them to be true. Until Jackson, Mississippi, two days ago. OK, I admit, I haven’t hitchhiked in the U.S. since the early 1990s, so there’s a gap in my data. But still, people really tuned me out in Jackson. It took me about 3 hours to get from New Orleans to the south side of Jackson. Then a 3 hour wait. Then a ride to north central Jackson. Then a half hour walk to find a spot and 5 hours in the beating sun with no ride. Sunset. Cheap hotel. The next morning, another 5 miles walking the shoulder and 3 hours burning sun before I finally got a ride out of town.

But first, before Jackson, the endless rows of debris from gutted houses after the Louisiana floods.

Then a few good rides out of Louisiana and into Mississippi. The country people — the less educated the better — helped me through. Blue collar guys going to construction sites, chain-smoking women with raspy voices and straw hair, the Pentecostal missionary. But Jackson, that was rough. Until a tattoo artist fresh out of prison finally picked me up and drove me into the pine forests between Jackson and Memphis. 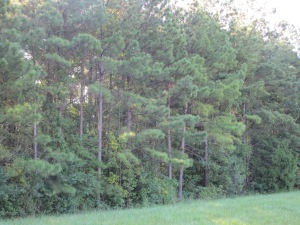 A scrap metal dealer asked me how long it took me to hitchhike from Mississippi to Germany. Nice as could be, clueless, big on the second amendment, an avid voter, and not for Hillary Clinton. Who was I to argue? When he dropped me, he didn’t want to let go, but kept talking to me while I stood with the door open.

I couldn’t take the sun any more on my arms and neck. I harassed people at the truck stop. The truckers were sympathetic, but this was not the 1970s. Nowadays, insurance rules forbade them from taking on hitchhikers, and trucking companies had cameras in the cabs. The great age of trucker-hitchhiker camaraderie was gone. The manager kicked me off the property but not before an old guy offered to take me halfway to Memphis.

Next stop. Skin baked. Butterflies on the side of the road.

I hovered by the gas station door and asked the first guy who pulled in with a pickup if he could help me with a ride to Memphis. He wasn’t thrilled, but let me in. In a half hour, we were fast friends. His wife had just got out of the national guard and was studying biology on the G.I. Bill. He had flunked English through high school and had barely gotten his GED. Now he and his brother had two trucks zigzagging around the country delivering trailer homes on recurring contracts. He took me all the way to Marston, Missouri. The lady working the truck stop counter there was chatty, supportive. Where the other manager had kicked me off the premises, she would have no doubt badgered every driver in sight to help me out. You never know what you’re going to get. But my plans had changed. Rachael was now on the way down from St. Louis, so she and my driver, Billy, and I met in Marston for coffee. Then Billy headed north to cross paths with his brother on I-57, and Rachael and I turned southward, back through the heart of the Bible Belt before we could reach the French Catholic swamplands of Louisiana and the lazy, humid, brass-band nights of New Orleans.

So do people hitchhike any more? Is it harder to hitchhhike? Flying in your own car would take 8 hours from New Orleans to Marston, Missouri. It took me 27 hours to go the first half and 4 hours to go the second half. Draw your own conclusions.