“No one ever hitchhikes across the Causeway.” The 24-mile Causeway Bridge stretches across Lake Pontchartrain from New Orleans north, to the towns of St. Tammany Parish (Mandeville, Covington). 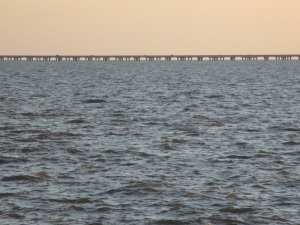 There is no mass transit across the bridge. As a worldwide hitchhiker (13 countries so far), I am accustomed to people saying that “no one hitchhikes here” or “you won’t get any rides here.” For the most part, they don’t mean to be discouraging. They are just trying to pass along useful information. So far, it has always been false.

My sister dropped me off at the last gas station before the bridge and open water. I didn’t know what to expect but stuck out my sign – “Cov.” for Covington, with a yellow sun and a few sketchy suggestions of happy grass and flowers – and waited. It was a good spot where drivers could see me up close while pumping gas, but I wasn’t in their face obtrusively either. Five minutes and a working-class guy in his thirties said to throw my bag in the back of the truck and hop in. He grew up in New Orleans but now lives in an old Covington house that has been in his family for generations. He offered to take me all the way to Covington, to any location, but I hopped out in Mandeville to visit my aunt from Honduras and speak Spanish for a while.

Although I’ve been in the area for a month, with lots of people on both sides of the lake, the flip (southbound) side of my sign – “New Orleans” with the same bright if infantile design – hasn’t been in use. Once, on my way to New Orleans, I was dropped at a Café du Monde, but a southbound friend picked me up before I could start hitchhiking.

One more time I had to hitch the bridge northbound. My sister dropped me at the gas station again. I stuck out my sign, and a guy who was already there when I arrived said to hop in the truck – another construction guy, this one from Georgia, going home after work to his wife and kids in the country. He could never live in the city, he said, and he seemed quite successful, with a nice new truck and all the amenities. Whatever people say, a hitchhiker here can always count on working-class guys in their 30s and 40s in pickup trucks. In Europe, the demographics are wider, as there is far less fear of street crime, and people of all walks of life pick you up. In the US, the demographic range of people who pick up hitchhikers is narrower, but the sanity level is wider. All the really crazy people that have picked me up in my 60,000 miles of hitchhiking were home-grown Americans. Like me 😊 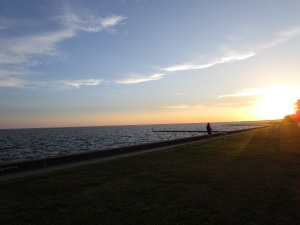 4 thoughts on “Hitchhiking the Causeway Bridge”