I was talking the other day with a young Ukrainian physicist and all-round intellectual type about the 10-minute dead space (hidden track) on An Awesome Wave, the excellent 2012 debut album by the English indie-rock band, Alt-J. I thought the album brilliant, strong and subtle in its aesthetic, but I don’t like dead space. It is conceptually an interesting design idea, but it loses its novelty value after a few iterations and becomes gratuitous. The dead space at the end of Abbey Road, on the other hand, not only had the full novelty value, as the Beatles were the first to deploy the technique, but the entire structure of the album bends toward and justifies that 15-second hiatus, the dead space, the black sign of mortality, between “The End” and “Her Majesty.” (“Her Majesty” was not listed on the original cover or record.) Bear with me as I try to execute this analysis without reference to the “Paul Is Dead” conspiracy theory that swept across pop culture during the month that Abbey Road was released (September 1969).

Back when you had LPs with 2 sides, Side 1 of Abbey Road (songs 1-6 on the CD)* gave us an almost archaeological journey through genres, from cool, edgy “Come Together,” to the reflective love song (“Something”), to the bouncy, pub-sing-along sound of “Maxwell’s Silver Hammer,” to the 50s-ish, doo-wop “Oh Darling,” to the child-friendly “Octopus’s Garden,” to the heavier, hypnotic rock and jazz counterpoints of “I Want You (She’s So Heavy).”  We also get a panoramic landscape of the Beatles’ sensibilities on this side, with songs by John, George, Paul, Paul, Ringo, and John, respectively.

The white noise that encroaches upon “I Want You” at the end of Side 1 might in some way foreshadow the black space at the end of Side 2, but it is really not until Side 2 proper that transitional spaces become blurred. The first song on this side (#7) is a beautiful acoustic with clear edges and clean finish. The transition from #8 to #9 is normal, except that #8 ends in the middle, not the end, of a musical motive, so we’re “waiting” for #9 in that miniscule gap between them. The move from #9 to #10 is a tiny bit more porous, as the edges are bridged only by the continuing sound of crickets. Then the medley begins in earnest, and remaining songs are really movements within a single whole.

Thematically, with “Golden Slumbers” (#14), the clouds begin gathering at this, the final moments of the final album recorded by the Beatles (although Let It Be was released later). The final sequence of “Golden Slumbers – Carry That Weight – The End” sounds like a Beatles’ farewell, comparable to Prospero’s epilogue in Shakespeare’s final play, The Tempest. The voice in “Golden Slumbers” raises two possibilities: either it is a soothing lullaby to a small child (go to sleep now and you’ll wake up to smiles) or the last rites to someone dying (let yourself drift into sleep and the angels will greet you when you rise). In context, the second interpretation makes better sense, since the song is drenched in melancholia and pitched to one who might share in the lament that “once there was a way to get back home,” who might recognize that closed path as a weight to be carried across the next passage, the weight of all that loss, the weight of mortality. This is, after all, the dying moment of the Beatles, the cracks of the breakup filling in with nostalgia for the heady days when as teenagers they changed the trajectory of cultural history, relief to get away from it all, hoping that some smile will greet them when they wake up. “Carry That Weight” weaves back in musical motives from earlier songs — most notably, “You Never Give Me Your Money” — and we can now look back and see that beneath the surface strand of Beatles “celebrations” and “negotiations,” there is a hidden strand of “breakdown[s]” and missed connections.

With “Carry That Weight” behind us, we get an exuberant guitar interlude, a burst of life, a sense of relief and liberation from the heaviness – we are witnessing not just a death but an archetypal death-and-rebirth pattern, a sonic anticipation of breaking the shell of those golden slumbers, breaking from death to rebirth. Then the guitar burst mellows into a mystical conclusion, a final couplet (a perfect iambic tetrameter couplet if you read it as it would be read from a poetry book) that summarizes the 8-year dream of the Beatles, with a few potent words and a sudden orchestral gravitas.

After this powerful farewell, we get the 15-second hiatus, the dead space before the “hidden track” – and “well-hidden” in its day because 15 seconds was a very long dead space in 1969 and because the album had increasingly melted songs together rather than using the hiatus at all. So if we’re startled when “Her Majesty” begins playing, the shake-up is not gratuitous. In the moments after death, even symbolic death, any fluttering back to life in the blackness must be startling. In this case, after the grand summation of the Beatles phenomenon in that couplet, from out of the black hole of the Beatles’ mortality, inexplicably, we get a return glimpse of the simple, playful, beautiful acoustic roots from the brainstem of the early Beatles, before they had all that weight to carry. (I’m not sure because I have no real musical training, but “Her Majesty” begins with what sounds like a recapitulation of “the most famous chord in rock history,” the one that opened “A Hard Day’s Night.”)

As reflections on one’s deathbed must enable one to see the values of life more keenly, so we can, from the perspective of Abbey Road’s ending, go back and read earlier details with more meaning filled in. The following lines from “You Never Give Me Your Money,” for example, must surely be on one level the bittersweet last words John and Paul, lifelong friends feeling the weight of estrangement, would have for each other as Beatles:

Finally, it’s hard to listen to Abbey Road and not ponder that sometime between 1962 (when Elvis Presley’s “Return to Sender” was the #1 song of the year) and 1969, an enormous paradigm shift had taken place and the era of music we now live in had begun. The Beatles not only mark the beginning of this era but, to a larger extent than anyone else, invented it. 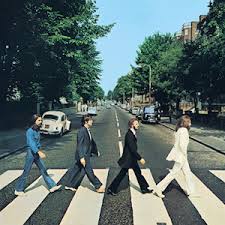