Don’t trust me as an expert guide to Bangkok. All I can do is give you a peek at a few neighborhoods from the point of view of a curious passerby.

My first impression was that the main thoroughfares here look like a modern city (though with a grittier, less pressure-washed look than you get in the West), but as soon as you turn on the side streets it suddenly looks you might expect Thailand to look. 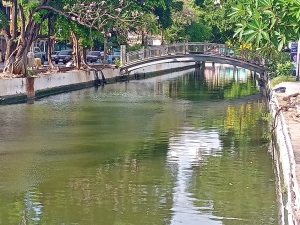 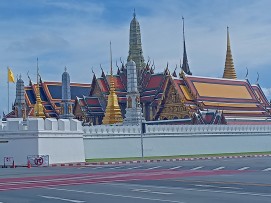 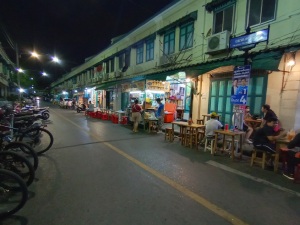 All I did was walk past this famous area in the north of Old Town in the daytime. They say it’s a mecca for backpackers, with mixed messages about whether there’s more artsy culture to it than just partying. I really can’t say. 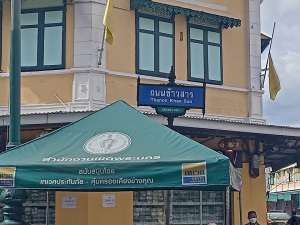 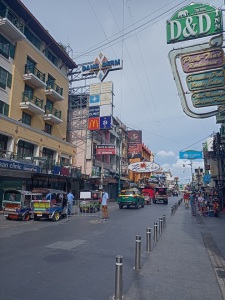 South of Si Lom Road, moving west toward the canal, was a lovely and lengthy day street market. 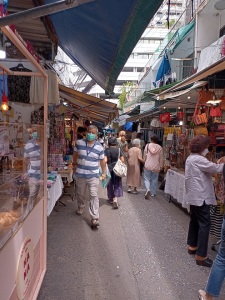 The western half of Si Lom, past the canal, seemed to have more of a neighborhood vibe. The Kokotel hotel looked great with a double room at about $18 (including a nice common workspace, good cafe, etc.). I didn’t get to explore this side of Si Lom enough. I only got a picture of the library next to the British Club 🙂

Ari seemed the place to live. At least somewhat leafy, more so than other neighborhoods. Quite a few little cafes for coffee, beer, food. Relaxed neighborhood atmosphere. Porcupine was good coffee stop. Garrison looked like good Irish pub, but closed the day I was there. I didn’t see any Westerners during my walk — Ari is not really on the tourist track as far as I can tell — but the feeling was a bit more cosmopolitan than in other local neighborhoods. 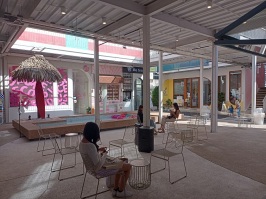 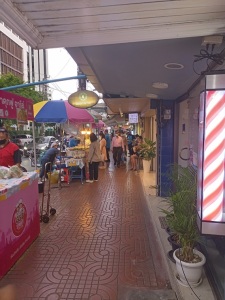 I didn’t get any pictures of this long diagonal shooting out of the city toward Cambodia, but it gave me the feeling of heading out to the suburbs, albeit still gritty and urban. Not a very attractive main thoroughfare, but sufficiently dotted with pubs and street vendors and hostels.

I loved Chiang Mai and Pai also — probably even more than Bangkok — but that’s for another day.

Remember: These are the unedited thoughts a total amateur just backpacking my way through Bangkok for a week 🙂