“Vagabonding through France and Belgium” might be a better title. Unlike in most of my “hitchhiking” blog entries, there was not much thumbing on this trip. I’d been on a backpacking whirlwind from New Orleans to New York to London, and I started this day with a 6 am coffee prepared by friends in East London’s Rotherhithe, near the pub that commemorates the proximate embarkation of the Mayflower.

Then the London overground to a meeting south of town and a ride-share to and across the channel from Dover to Calais. The driver, Gilles, was generous with snacks and journey information, and we shared the car with a Frenchman, Ren, who worked for a London publisher, and a French woman, Sophie, studying law in London, both heading out for a weekend in France. 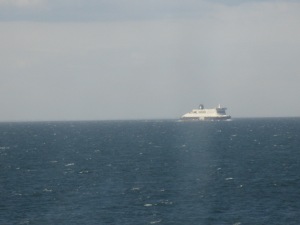 My companions helped me with a little French.

They were all much better at English, though, making it the language of choice. Ren’s girlfriend was in New York and his family in Lille; Sophie was Parisian through and through. She gave me some great tips about romantic little fishing villages on the French Atlantic. Maybe one day Mary can come from the U.S. and meet me there.

The guys were still digging the French-Italian-American rap when Sophie got some Verdi through the bluetooth. When she told the story of La Traviata writing the letter that spelled catastrophe while her innocent lover hovered over her thinking all was beautiful and well, it had me near tears. And I don’t even like opera.

All the while, along the way to Lille, I eyed up the good, the bad, and the ugly ramps for hitchhiker’s reference. You never know.

My first hitchhiking point in Lille was a great pullover location but not a direct feed to my route. Drivers from here could be going three of four different highway directions or around the upcoming circle and into the city. Lille looked a beat, dusty off-white in the afternoon sun from this angle.

After just 10 minutes I got a ride. Well, sort of. A rough-hewn, amply tattooed woman picked me up, said she’d hitchhiked in from Paris herself yesterday, and drove me about 500 meters, just past the traffic circle to the ramp that led to multiple highways.

“I thought this would be a better spot,” she said.

It was once step closer to my destination route, but the cars flying around the curve onto the tightly bordered ramp had no place to pull over. I walked back to my old spot.

Another hour or so. I started slowly walking toward the Metro station with instructions I’d gathered from Ren about which station to go to for trains into Belgium. Then another hit. A young North African couple (Algerian/Moroccan) picked me up, fed me on leftover steak and candy bars, and got me onto the right highway into Belgium.  This was much further south than the route I’d hitchhiked last month through the Flemish part of Belgium. This is the French part. No problem there, other than greater language difficulties for me. The sun was slowly setting. The couple driving me offered to go miles out of their way to bring me to the station in Mons and walk me in to make sure I could get a ticket. From there is was a series of three cheap local trains — to Liege, then Verviers, then Aachen.

I love the feeling of being in Aachen. I strapped on my pack and walked the shortcut, bypassing the medieval tower at Franzstrasse and going through the neighborhood, to zig zag down the ski slope shaped steps that led down from the neighborhood to the cinema.

Then to the altstadt and my room at the Theaterplatz, to look over the night lights and the shops below before a good night’s sleep and a morning visit to Charlemagne’s Dom. 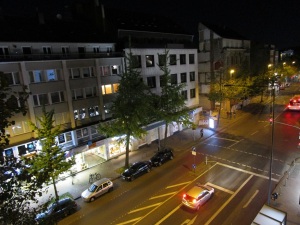 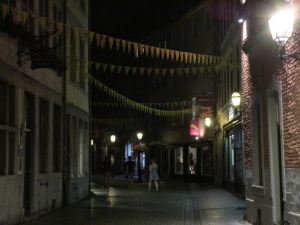 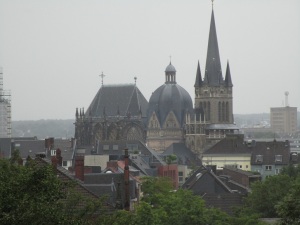