Steve Morris recently posted a curious piece on the “meme.”   Evolutionary biologist, Richard Dawkins, coined the term in The Selfish Gene (1976). Predating the Internet, Dawkins’s interest was in how memes – units of cultural transmission – emulate evolution, with successful ones proliferating and duds dying out. Steve points out the irony that in today’s social media, it’s the most “unfit” memes – those that promote ignorance and bigotry – that seem to survive and proliferate. To enhance the scope of the entertainment, I’d like to weave in an additional discourse – Leibniz’s philosophy of the monad.

As a 17th-century German philosopher, Leibniz predated evolutionary biology as well as the Internet, but his speculative philosophy (the metaphysics of the monad) was grounded in his street cred as a mathematician and physicist, and perhaps for that reason it can sound eerily prescient of the holographic models of the universe about which today’s physicists speculate.

As in his mathematical theory of “infinitesimal analysis,”* which in the minds of many gave Leibniz a claim equal to Newton’s as the inventor of calculus, Leibniz sought to base his metaphysics on the idea of indivisible units. These indivisible units, “monads,” were “the elements of all things.” Because they are indivisible, they are in themselves inscrutable. “The monads have no windows through which anything can enter or leave.” After all, only a “composite” can add or subtract something, and the whole point of the monad is that it is a theoretical projection of the simplest, indivisible unit. (Mathematically, as far as I can understand Leibniz’s math, it is the unit that, having no increments, is by definition too small to ever be measured.)

Furthermore, each monad must be unique. For this, we need to get into the physics of space, according to Leibniz, of which I can only scratch the surface. For Leibniz, there is no such thing as empty space. There is only motion, rest, and change. And the fundamental unit of motion, rest, and change we call the “monad.” So there is no “space” per se, but there is a force field consisting of infinitesimal monads, each defined by inherent force, the qualities and laws of which are utterly inaccessible to the outside (no windows, remember). And the physics of the force field requires that “each monad while following its own inherent nature and laws adapts itself to all the others outside itself.” Each monad must by necessity fill a unique orientation point in the force field. And this is how Leibniz teases us to his logical (holographic) conclusion about the universe: “This connection of all created things … the connection and adaptation of every single thing to all others, has the result that every single substance [every monad] stands in relations which express all the others. Whence every single substance is a perpetual living mirror of the universe … They are but perspectives of a single universe, varied according to the points of view which differ in each monad.”

Leibniz’s holographic conclusion applies not only to the objective world but to the subjective one as well: “Consequently, everybody experiences everything that goes on in the universe, so much so that he who sees everything might read in any body what is happening anywhere, and even what has happened or will happen. He would be able to observe in the present what is remote in both time and space.”

The limiting phrase here is “he who sees everything.” This suggests that although each monad contains all the information to reconstruct the entire universe of which it is a part, it is no simple matter for us to decode that information. Only “one who sees everything” would be able to see the entire universe within the single monad. Each soul is limited in its self-discovery by its own orientation. Each soul “can read in itself only what is distinctly represented in it; it is unable to unfold all at once all its folds; for these go on to infinity.”

So back to the meme. Whether or not it expresses the evolutionary model of adaptation, does it express the mathematical/metaphysical model of the monad? Take as an example this meme that I sent around on the Internet. 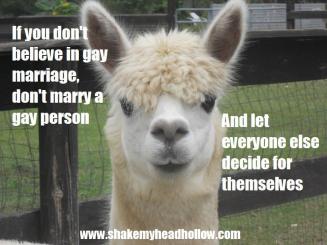 The meme is not completely indivisible. There are letters and pixels and so forth within. But one could argue that the meme as a whole expresses one cultural orientation point, and that none of those simpler units is a cultural expression in the same way – they are not units in the cultural force field of the meme. It might lack the mathematical tightness that Leibniz would wish for, but perhaps that was Leibniz’s limitation. Math aside, it might be very useful to view the meme as a more-or-less simple expression of one cultural orientation point. To what extent is it in a holographic force field? With studious effort, one could certainly infer how the meme defines itself as a unit of force relative to the various positions staked out on gay rights. Perhaps from there, one could broaden the scope and see how the gay rights field of discourses illuminated by our monad-meme in turn illuminates all the discourses of sexuality implied thereby, not to mention various religions and philosophies and political formations at the perimeter, etc. Like ripples from a pebble dropped.

I think Steve is right about the meme’s relations to evolutionary biology. I have serious doubts about whether the Internet is predisposed to favor the “fittest” memes, unless we define “fittest” in an extremely idiosyncratic (and humorous no doubt) way. But the meme might express in its way Leibniz’s metaphysics of the monad. The holographic universe of the cultural dimension. And for those physicists who balk at the holographic universe, we give you the black hole. No, I am not inventing a new insult (“giving you the black hole”), although that in itself might be a tangent meme worth following. What I mean is this: Black holes are universally accepted in today’s physics, and what are black holes after all? Monads, universes unto themselves, with “no windows,” units of force that are utterly inscrutable and yet “perpetual living mirror[s] of the universe” around them. They might be like the mysterious “signs” in the modernist linguistics of Saussure and Wittgenstein, where words/signs have no “windows” to any referent in the world “out there” – there is no peephole into the system of signification – but each sign achieves a unique meaning relative to all the other signs within the system. Like signs in the linguistic universe, so black holes in the physical — monads, my friends, cosmic scale reflections of the sorry memes of which Steve Morris laments.

I once heard of an art historian who said, “Show me one artifact, one button, from a long-lost civilization, and given time I will reconstruct all the values of that civilization.” Academic bravado aside, this art historian was a monadologist par excellence, a believer in the holographic universe. Perhaps, when we are long gone and re-discovered by some future civilization, some wily future art historian might do me the honor of an infinitesimal analysis of my gay alpaca meme.

*The way I understand it, Leibniz’s infinitesimal analysis offered a solution to the age-old problem of rectifying curvilinear figures – squaring the circle – and thus rendering them accessible to precise geometric analysis. By casting the circle as a series of infinitesimally distant next points, Leibniz could in theory decompose any curvilinear figure into partial triangles.

Postscript: See this National Geographic article suggesting that our universe may exist inside a black hole, with many other inaccessible universes in their own black holes: