Rat a tap tap. Christopher knocked at the cabin door of Alice and Evelyn. He didn’t really have to knock but it seemed polite, in case they were making love or having an argument. Alice and Evelyn didn’t really have arguments but politeness doesn’t always speak to what is but to what ought to be. And it was written somewhere that lovers ought to make love and ought to have lovers’ quarrels from time to time.

“Were you making love or having an argument?” asked Christopher.

“No, we were just making sangria for the gathering. Would you like to cut the oranges?”

“Yes,” said Christopher, and in they went.

Christopher was a regular guest, so there was nothing unusual about his visit. He occasionally came and sometimes spent the night. Sometimes he came because he was making a new map and reassessing the territory. Sometimes he came to help Alice and Evelyn in the garden or with the water lines. With his sandy surfer hair and his clear hazel eyes, Christopher had a mild-mannered way that made him well-liked in New Arcadia. But there was a physicality to his presence too, an outdoorsy vitality, slim but solid, that was almost rugged. He had a light beard and mustache, but nothing like John Wilson’s mustache. Nothing. And Christopher was practical, too. It’s always nice to have someone practical around.

“Making maps and helping with the water lines go together,” he said.

“I can’t tell you,” said Christopher.

“Because everyone needs his own mystery.”

“That’s just the way Christopher is,” Evelyn would later tell Alice. As if Alice didn’t know.

Christopher lived across the woods. You have to bypass both the factory and the hamlet to get there. His lover, Freyda, would sometimes tell him, “Christopher, why don’t you go spend the night with Alice and Evelyn?”

When she said this, he knew that she had night work to do. Her night work was maintaining the music of the spheres. The fairies couldn’t do everything. The music of the spheres must always play, but now and then one must tune the imaginary instruments. “Sort of like an organ,” Freyda would say, her red locks cascading down in a flame. “But with many trap doors hiding tiny mechanisms that are constantly changing. Sometimes they change so fast, you open a door and fix something and before you can close the door it changes into something else.”

No one could verify exactly what Freyda meant because, of course, the instrument was imaginary. But one thing everyone could vouch for – keeping it tuned was the task of the white witch. The fairies couldn’t do it. Freyda was the white witch.

John Wilson lifted one of his bushy eyebrows, and the black hairs came to attention. Alice thought of a black cat’s tail with the hairs standing in response to a threat.

“Your eyebrow looks like a black cat’s tail,” she said.

John Wilson reached up with a massive paw and touched his eyebrow, and then touched his equally bushy mustache, as if to compare the two. He looked for a moment like a distraught walrus sloshed in a button-down shirt. Then he went on.

“The fairies,” said John Wilson. “The hum went away by the pond last night. No hum for an hour and a half.” The fairies kept the whole of New Arcadia going. They were rarely visible but often audible, a humming that recalled the humming of bees restless to massacre the males and slaughter the other princesses to please their sister, the newly chosen queen. The fairies did not work in the fields or in the factory. They did not cook or clean. But it was they who wove a sense of destiny into New Arcadia. Without a sense of destiny there would be no going on, for there would be nowhere to go.

The fairies had no enemies – for how could destiny have an enemy? – save one. Ladybugs. Tiny orange specks with wings. Wings with tinier black dots. The ladybugs made no humming noise. No hint of massacres for the newly crowned queen. They just flittered in quiet beauty, careful to disturb no one, seen but not heard. Thus, no one, not Alice or Evelyn, not the kleptomaniac, not the mapmaker, not the white witch, not the rain king, not John Wilson, not even the sweeper as far as anyone could tell, could divine their purpose or what it was about them that touched the spleen of the fairies.

On Sept. 8, 2022, BookLife reviewed Alice, the post-apocalyptic adult hippie fairy tale you’ve all been reading (or are eager to download and read today). Here’s a clip from the review:

“A whimsical, fairytale-like quality … magnetic … a storybook world [with] a flavor not often seen.”

And Northwestern University’s Jeffrey Burgdorf ran it through his nefarious artificial intelligence (AI) machine and asked it to create a cover image. Below is the actual cover (left) and the AI cover image (right). Take your pick.

Burgdorf’s AI, by the way, gave Alice “the first ever 5-star Amazon review done entirely by artificial intelligence,” though I have no idea what mysterious feelings beating in that mechanical heart motivated the encomium. 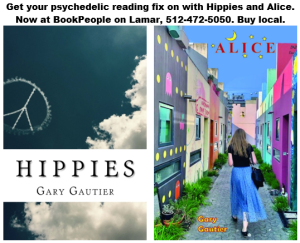 Finally got my own shelf at Quimby’s Brooklyn, NYC! 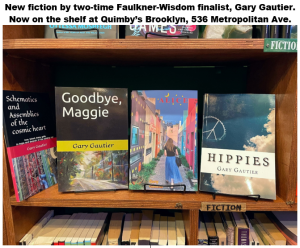 Alice sat by the pond cupping her hand in the water, as if searching for an undersea plant or animal. The sun was going down. She stripped off her gown and dove in to do something but she could not remember what. When she came up, something was in her hand and the stars were above. They were the same stars as ever, but the constellations were different. Virgo and Scorpio and all the others were gone, and some new arrangement had begun. Something moved in the woods beside the pond. Not really in the woods. In a juniper bush. It was too big to be a fairy. Alice did not know what it was that moved in the juniper bush.

As Alice approached the shack, she could hear in the dark the whispering of the forest. She saw the lovely silhouette of Evelyn through the window, sleeping in bed. She entered, and Evelyn opened her eyes.

“Was the rain king there?” asked Evelyn.

“No. Not today. But something happened. I dove in and the whole cosmos changed. The stars are still there but all the old constellations are gone. Virgo and Scorpio are gone now.”

Evelyn sat up. She was taller than average, with a nobility of stature that contrasted with the petite Alice.

Alice sat on the bed. Evelyn leaned toward her, pushed a brown curl from the brown eye of Alice, and kissed her twice. Once on her favorite birthmark in the whole world, the pink crescent moon on Alice’s neck just above the collarbone. And once on the mouth.

“We can hope,” she whispered.

The next day, John Wilson came over to the shack. No one ever called him “John.” They always said, “John Wilson.”

“Something happened with the fairies last night,” said John Wilson. 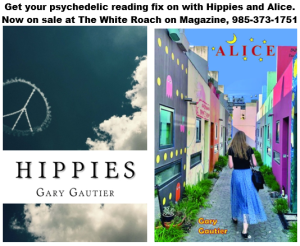 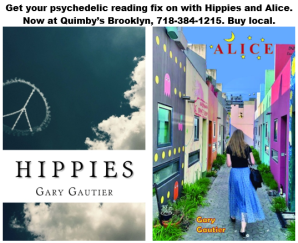 Get your psychedelic reading fix on with Hippies and Alice. 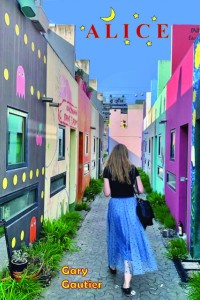 In this post-apocalyptic adult hippie fairy tale, Alice wanders away from her utopian commune to find another world and to slowly connect the dots of her own world’s missing history. Comic, poignant, thoughtful, and sparkling. A magical tapestry with many threads by Amazon bestselling author (90-minute reads free list) and two-time Faulkner-Wisdom Prize finalist, Gary Gautier.